Civil unions and partnerships are they the same as marriage? 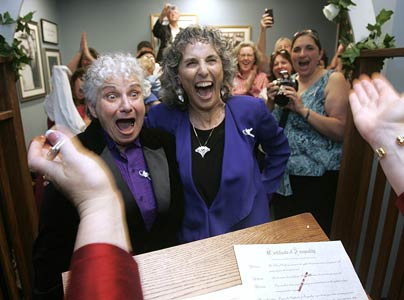 Civil unions and domestic partnerships are similar to marriages. They offer legal recognition but the actual benefits are minimal. Many people consider civil unions, even those which grant equal rights, inadequate, as they create a separate status, and believe they should be replaced by gender-neutral marriage.

In the United Kingdom, civil partnerships were introduced in 2005. The law gives civil partners identical legal status to a marriage, and partners gain all the same benefits and associated legal rights; ranging from tax exemptions and joint property rights, to next-of-kin status and shared parenting responsibilities. Partnership ceremonies are performed by a marriage registrar in exactly the same manner as a secular civil marriage. In the first year, 16,100 ceremonies took place. Civil unions in New Zealand are identical to British civil partnerships in their association with equivalent spousal rights and responsibilities to full-fledged opposite-sex marriage.

In Australia, Commonwealth law prohibits the recognition of same-sex marriage. However, all states and territories provide a range of rights to same-sex cohabiting couples, equal to those afforded to opposite-sex de facto couples. These rights are gained without registration. So any wedding service is symbolic of only. But, formal domestic partnership registries do exist in Tasmania, Victoria, and the Australian Capital Territory. Since November 2008, same-sex couples are recognized as de facto partners in a wide range of Commonwealth legislation, including superannuation, social security, health care and taxation.